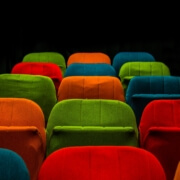 Dublin, the capital city of Ireland, has a rich history and culture that is reflected in its vibrant arts scene. Cinemas in Dublin offer a diverse range of film experiences, from independent art-house theaters to multiplex chains showing the latest blockbuster movies. Whether you’re a film buff looking for the latest critically-acclaimed release or just want to catch a popular movie with friends, Dublin has a cinema for you.

One of the most well-known cinemas in Dublin is the Irish Film Institute (IFI), located in the heart of the city on Eustace Street. The IFI is a cultural hub for Irish film, showcasing both classic and contemporary Irish cinema as well as international film. The IFI also hosts special events and film festivals throughout the year, making it a popular destination for film enthusiasts.

If you’re looking for a more traditional cinema experience, Dublin has several multiplex chains to choose from. The Odeon Cinemas group has several locations in Dublin, including the Odeon Point Village and the Odeon Charlestown. These cinemas offer a wide range of film choices, from the latest Hollywood releases to independent and foreign films.

For a more unique film-going experience, check out the Light House Cinema in Smithfield. This independent theater is known for its quirky decor and eclectic film selection, featuring a mix of mainstream and art-house movies. The Light House also hosts special events, including live music and Q&A sessions with filmmakers.

The Dublin IMAX is a popular destination for film enthusiasts and families alike. Its state-of-the-art technology and giant screen make it a must-visit for anyone looking to experience the best in film. So if you’re in Dublin and looking for a unique and unforgettable movie-going experience, be sure to check out the IMAX cinema at Cineworld Parnell St.

No matter what type of film you’re in the mood for, Dublin has a cinema to suit your needs. Whether you want to catch the latest blockbuster or explore the world of independent film, the city’s cinemas offer a wide range of options for movie-goers.

Subsrcibe to our Newsletter

This site uses cookies. By continuing to browse the site, you are agreeing to our use of cookies.

We may request cookies to be set on your device. We use cookies to let us know when you visit our websites, how you interact with us, to enrich your user experience, and to customize your relationship with our website.

Click on the different category headings to find out more. You can also change some of your preferences. Note that blocking some types of cookies may impact your experience on our websites and the services we are able to offer.

These cookies are strictly necessary to provide you with services available through our website and to use some of its features.

Because these cookies are strictly necessary to deliver the website, refuseing them will have impact how our site functions. You always can block or delete cookies by changing your browser settings and force blocking all cookies on this website. But this will always prompt you to accept/refuse cookies when revisiting our site.

We fully respect if you want to refuse cookies but to avoid asking you again and again kindly allow us to store a cookie for that. You are free to opt out any time or opt in for other cookies to get a better experience. If you refuse cookies we will remove all set cookies in our domain.

We provide you with a list of stored cookies on your computer in our domain so you can check what we stored. Due to security reasons we are not able to show or modify cookies from other domains. You can check these in your browser security settings.

These cookies collect information that is used either in aggregate form to help us understand how our website is being used or how effective our marketing campaigns are, or to help us customize our website and application for you in order to enhance your experience.

If you do not want that we track your visit to our site you can disable tracking in your browser here:

We also use different external services like Google Webfonts, Google Maps, and external Video providers. Since these providers may collect personal data like your IP address we allow you to block them here. Please be aware that this might heavily reduce the functionality and appearance of our site. Changes will take effect once you reload the page.

The following cookies are also needed - You can choose if you want to allow them: